For older women | The Pill, Patch and Vaginal Ring | Mini Pill, Injectable and Implant | Coil, Mirena and Condoms | Sterilisation | When to stop

An IUD can be used for contraception at any age. It is very reliable but may cause menstrual periods to become heavier or slightly more painful. Having an IUD inserted into the womb is a very minor procedure (on a similar scale to visiting the dentist!) and once it is inserted, the woman does not need to remember anything else for contraception. If an IUD is inserted after the age of 40 years, then it can remain without being changed until the menopause. Although IUDs have not been very widely used over the years in the UK, they are the most common reversible method of contraception worldwide and are now becoming much more popular in the UK. 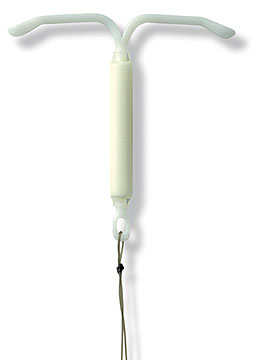 Mirena® is a hormone-releasing intra-uterine system which releases progestogen into the womb. It is a highly effective contraceptive but also drastically cuts down the amount of bleeding and pain with menstrual periods by making the womb lining thin. It is fitted into the womb like a normal IUD. It is therefore an ideal method for women who have period problems and can also continue to be used when a woman becomes menopausal and wishes to take HRT. With a Mirena in place, HRT can be taken in the form of estrogen only whereas normally HRT for women with an intact womb consists of estrogen and progestogen. Progestogen being delivered directly into the womb from the Mirena can reduce progestogenic side effects as well as reducing bleeding. Women should always be warned that there is often a lot of erratic bleeding and spotting in the first few months of use before the bleeding pattern settles down. Around a quarter of women using a Mirena® find that their periods stop altogether.

Condoms are recommended at all ages to prevent the spread of sexually transmitted disease, particularly when individuals start a new relationship. They are an effective method of contraception for all ages when used properly. As hormone levels begin to change, many women experience vaginal dryness, which can cause discomfort during intercourse. Vaginal lubricants can be very helpful but care should be taken if oil-based vaginal lubricants are used along with condoms, since some can cause latex condoms to break down and hence reduce the contraceptive effect of the condoms. Diaphragms may be used, often very reliably in older women.