Some women reaching the menopause often have trouble with their periods but most celebrate the "freedom" from this monthly cycle. However, argues Dr Heather Currie, is there any need to put up with them at all?

All women know about periods and know how annoying and inconvenient they can be. We put up with them for years and years, accepting them as a normal part of being a woman. We may go on to the contraceptive pill to control fertility, but guess what, we still have periods and we think that's OK. It is only when they become much heavier than usual or irregular, painful, absent or uncontrollable that we may go along to the doctor to seek help.

Rather than waiting until they are really troublesome, which often happens as we approach the menopause, our questions should be, why do we need to have periods at all and what can we do about them?

I believe that part of the problem is that many women find it difficult to talk about periods, or indeed anything that affects "down below". Many of us grew up in an era when any woman attending their doctor with gynaecological problems was described, in hushed tones, as having "woman's problems".

This inability to talk about and even use the correct medical terms is exampled by the many terms used instead of the simple word, period. For example, I have heard "periods" referred to as: "time of the month ", "my monthly", "my visitor's here", "Aunty Flo" and my favourite, "the painters are here"! We need to tackle the problem to get rid of the taboo and talk more freely about this very important aspect of our lives.

Let's go back to basics. The reason that we have periods is because, when working normally from puberty until the perimenopause, our ovaries produce an egg each month and along with that produce a complex balance of estrogen and progesterone. Estrogen stimulates the lining of the womb to thicken it so that it is ready to be able to accept a fertilised egg and then, after egg release, more estrogen is produced, as well as progesterone. Progesterone causes the lining of the womb to be "spongy" so that an early pregnancy can be maintained. If the womb has not received a fertilised egg, the same stimulation to the lining occurs but then the hormone levels drop, the lining cannot be maintained and so it is shed - the period, or menstruation and a new cycle begins.

Biologically, we were actually designed to spend most of our reproductive years either pregnant or breast feeding, when our hormone levels would be steady and we would not experience periods. In fact women today put up with more period cycles than any generation before. And they do "put up" with them, seeing this pattern as natural and normal. Any deviance from a monthly bleed is viewed suspiciously. In fact, there is absolutely nothing helpful or good about periods and the more that I and other healthcare professionals can do to offer women period-free alternatives, the better.

Take the contraceptive Pill, for example. A very useful medicine for controlling fertility and with the potential to control periods yet it was designed to mimic the normal cycle in that a tablet a day is taken for three weeks, followed by a Pill-free week, recreating the drop in hormone levels that leads to shedding of the womb lining.

Surprise, surprise, taking the Pill in this way leads to a monthly bleed, what joy! The biggest annoyance is that we have accepted that this is required and gone along with it for many years. In fact there is no scientific reason to have the Pill-free week and women can now be advised to take Pills without a break, or at least just have a break perhaps at the end of every three packs or so rather than every pack.

Fortunately, Pills are now starting to appear that do not have this enforced break, however, more period-free options are desperately needed. 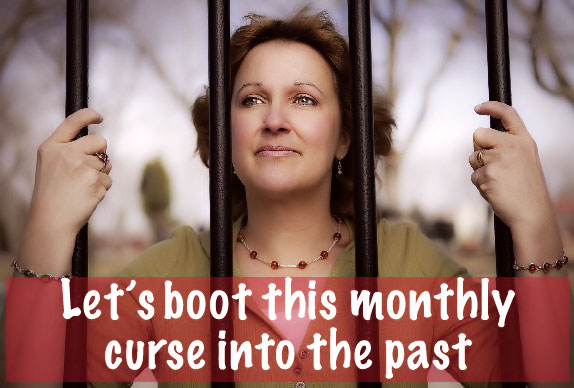 You may wonder why I am talking so much about periods in a menopause magazine, when menopause is the time that periods stop. Well, periods do often change as we head towards the menopause and this change can often be the first sign that our ovaries are not working so well (the stage of the perimenopause). If our periods have stopped we must try to have a better understanding of why periods occur and how they can be controlled / reduced / stopped, then we may go some way in being able to advise our daughters and grand-daughters to have period-free lives.

So, what happens leading up to the menopause? As described, to produce the regular monthly bleed, the ovaries must release an egg each month and must produce the correct balance of estrogen and progesterone, followed by a drop in the levels of these hormones. As ovaries age and egg cells reduce both in number and quality, the balance of estrogen and progesterone production starts to change. In the early years of transition from the normal functioning ovaries to the stage of the ovaries not functioning at all, there may be a lack of regular egg release and hence lack of progesterone production.

This is evidenced by a change in periods since progesterone in particular regulates the womb lining. The lining may become thicker before it is shed so that periods may be less frequent and then heavier and prolonged when they do arrive. Periods may also occur more frequently at this stage and may be totally erratic.

While for many women with this change in pattern, the cause turns out to be change in ovarian function and hormonal change, any increase in bleeding, or bleeding between periods in women over the age of 45 should be reported to your doctor and investigation may be required to rule out other causes.

Investigations of increased bleeding should start with a vaginal examination, making sure that you are up to date with smears. This may include referral to a local gynaecologist for sampling of the womb lining (feels rather like having a cervical smear taken, is usually carried out very easily and only takes a few minutes).

Sometimes, a scan may be helpful and occasionally a hysteroscopy, whereby a small telescope can be passed through the canal of the neck of the womb, to see inside the womb itself. A hysteroscopy can be carried out in an out-patient clinic and usually causes minimal discomfort. See more information on these investigations, with video clips at www.menopausematters.co.uk/investigations.php

When it has been confirmed that the period problems are due to hormonal changes, then very effective treatments can be used. Some women are happy to be reassured that there is no significant, serious cause. They want simply to cope with the bleeding and await the onset of the ovaries declining further, producing gradually lower levels of estrogen and progesterone so that eventually the womb lining is not stimulated at all and the periods stop completely.

However, the transition phase may take several years. During this time, heavy bleeding can cause huge embarrassment and distress with uncontrollable flooding often occurring, so it is vital to be aware that this can be treated.

Treatment options include the replacement of progestogen (the man-made version of our own progesterone), which can be taken in the form of tablets, or most effectively as a hormone releasing coil, (Mirena).

A recently developed contraceptive Pill, Qlaira, is licensed for control of heavy menstrual bleeding, as well as for contraception. If medical treatments are not helpful, then surgical options can be considered. Destruction of the womb lining, endometrial ablation, can offer significant reduction in blood loss by a minor procedure, avoiding major surgery. As a last resort, removal of the womb itself (hysterectomy) will offer a permanent end to periods.

The number of women requiring hysterectomy has reduced significantly over recent years with the advent of effective, less drastic options, but it still has a place.

So if I take HRT will it restart the periods? This is a commonly asked question and the answer is - it depends. First, HRT should not be used purely to control heavy periods and instead the options described earlier should be considered. The main aim of HRT is to replace the estrogen and should be considered when symptoms of estrogen deficiency, such as hot flushes, night sweats, sleep disturbance, mood changes and joint aches occur, or if menopause occurs early.

Progestogen is included with estrogen in HRT to provide protection of the womb lining and the way in which the progestogen is given determines the presence and the pattern of bleeding.

It is clear that the change and cessation of ovarian function affects us all differently and so treatments must be individualised. If HRT is required at the early stage when some periods are still present, it is given in a way that mimics the normal cycle and so a monthly bleed will take place in about 85% of women who take this kind of HRT (known as sequential HRT).

The good news is that in most users, the bleed is not heavy and occurs at an expected time. However, if HRT is started when it is fairly clear that periods have stopped, by having had at least a year of no periods, then it can be taken in a way that does not stimulate the womb lining (known as continuous combined HRT).

Although some bleeding in the first six months of continuous combined HRT is very common, it does not cause the monthly bleed. Finally, if a Mirena is in place, estrogen only HRT can be taken since the Mirena provides progestogen directly into the womb itself, keeping the womb lining thin and giving excellent control of bleeding in the majority of users.

Bleeding after the menopause

Bleeding which occurs some years after the menopause can be frightening and should be reported to your doctor. Serious causes such as cancer of the womb lining need to be ruled out by investigations as described earlier. For many women, no serious cause can be found and they can be reassured. A common finding is thinning of the vaginal walls (atrophy), due to the later effect of estrogen deficiency. This can also cause vaginal dryness, discomfort, irritation, pain during sexual activity and also bladder problems such as passing urine frequently, having an urgency to pass urine, passing urine at night and recurring infections. Once a serious cause of the bleeding has been ruled out and if it seems likely that the cause is atrophy, then this can be treated with low-dose vaginal estrogen in the form of tablets, creams, pessaries or a vaginal ring. Treatment can be used long term, can reverse the changes and maintain vaginal and bladder health.

Sadly, periods are a part of modern day life and have no useful purpose.They can and should be controlled, especially when they cause even more trouble than usual when leading up to the menopause and do not always have to return with the use of HRT. Let's make periods an evil of the past!

This page is an archived copy. » See the Menopause Matters Magazine site here